Candes-Saint-Martin, one of the most beautiful villages in France

Rated as one of the most beautiful villages in France, Candes-Saint-Martin is the perfect spot to enjoy an incredible view. From the north bank of the Loire, the white tuffeau stone in the village separates the blue sky from the blue River Loire. Now add the sandbanks and the gabarre river boats and the result is a perfect photo!

At the confluence of the River Loire and the Vienne, the village of Candes-Saint-Martin naturally developed as a river port. With the Amarante and the Belle Adèle, their traditional gabares (river boats), the Delaporte brothers are preserving this heritage in their own way with some great boat trips. A short 45-minute trip, an escapade at dusk (1 hour 30 minutes) and even a romantic outing at night along the River Loire: whatever you choose, it is sure to be a memorable moment!

The village of Saint Martin

The man who cut his cape in two to share it with a beggar is none other than Martin of Tours, the bishop of the capital of Touraine, and also known as Saint Martin. The piece of cape he kept later became an object of veneration, and is the origin of the word “chapel”, the place where people came to see the famous cape!

Many villages are named after him, but the holy man died here, in Candes-Saint-Martin. The beautiful Saint Martin collegiate church was built on the site of his house. 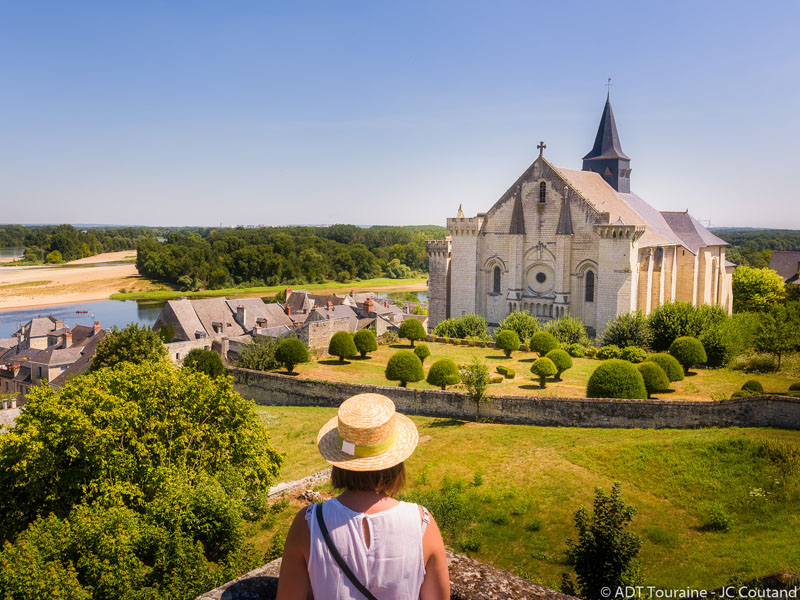 This is also where the legend of “Saint Martin’s summer”, when flowers started blooming along the River Loire on a November day, as the remains of Saint Martin were transported by boat to the Basilica of Tours.

Visiting Candes-Saint-Martin and the neighbourhood

A short 3.5 kilometre tour will take you along the charming streets of this beautiful village, which is close by Montsoreau, another of the “most beautiful villages of France” (with a château open to visitors). Within a range of 10 km, the royal fortress of Chinon, the abbey of Fontevraud and the Château de Saumur are really not to be missed, but other sites are also well worth a visit, such as the Rabelais Museum and the village of Turquant with its cave dwellings.

At the heart of a golden wine triangle, at the centre of the Bourgueil, Chinon and Saumur AOC areas, Candes-Saint-Martin is also a good starting point for visiting the wine cellars. It is also a central stage on the Loire à vélo cycling route.

If you want to stay in the area, check out the guest houses and gites at the Château de Candes: you won’t be disappointed!