In Europe and particularly in France, the beginning of the 16th century was marked by great changes. America had been discovered, humanism was popular (culture had to complement Humankind’s natural qualities), the defensive contingencies of castles had given way to greater architectural elegance and sciences were moving forward. At the very heart of these upheavals, a man embodied the desire to move beyond the realm of acquired knowledge: Leonardo da Vinci.

He stood out from all the other children in the village of Vinci (near Florence) at a very early age through his unquenchable curiosity for everything around him, he would observe every detail meticulously and, from his very first sketches, developed the ability to reproduce everything. His talent led him to become a pupil of Andrea del Verocchio, renowned, eclectic artist with whom he would find substance to satisfy his thirst for knowledge.

He went on to become an independent master painter and worked in particular for the Duke of Milan (Ludovico Sforza, who moreover was later imprisoned in the Royal city of Loches…) for whom he would organize huge festive events, simultaneously inventing spectacular theatrical machines which would see him bestowed the title of engineer. From then on, he was consulted and asked to reflect on a variety of topics. Construction and architecture, weaving loom mechanisms, military and hydraulic equipment, urbanism… His remarkable inventions arte showcased in the Château of Clos Lucé:

Leonardo da Vinci left Italy in the autumn of 1516 to settle in Amboise, invited by Francis I, and took with him all his notebooks (written backwards, mirror writing style, to protect his secrets) and three of his masterpieces: his St Anne, St John the Baptist and Mona Lisa (La Gioconda). At this time, paintings only illustrated sad faces, but this Mona Lisa fascinated with her smile and her eyes that seemed to follow you. 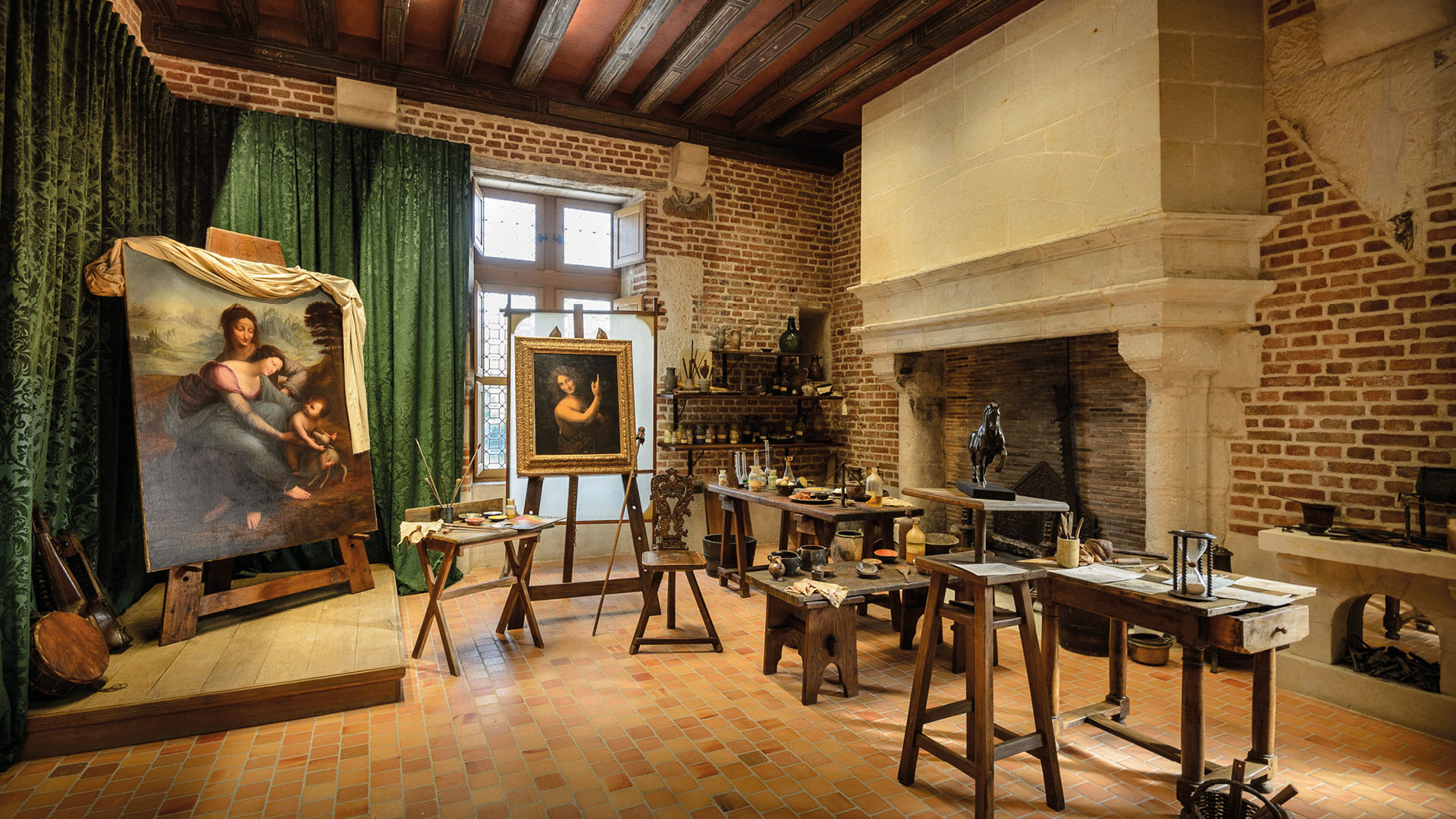 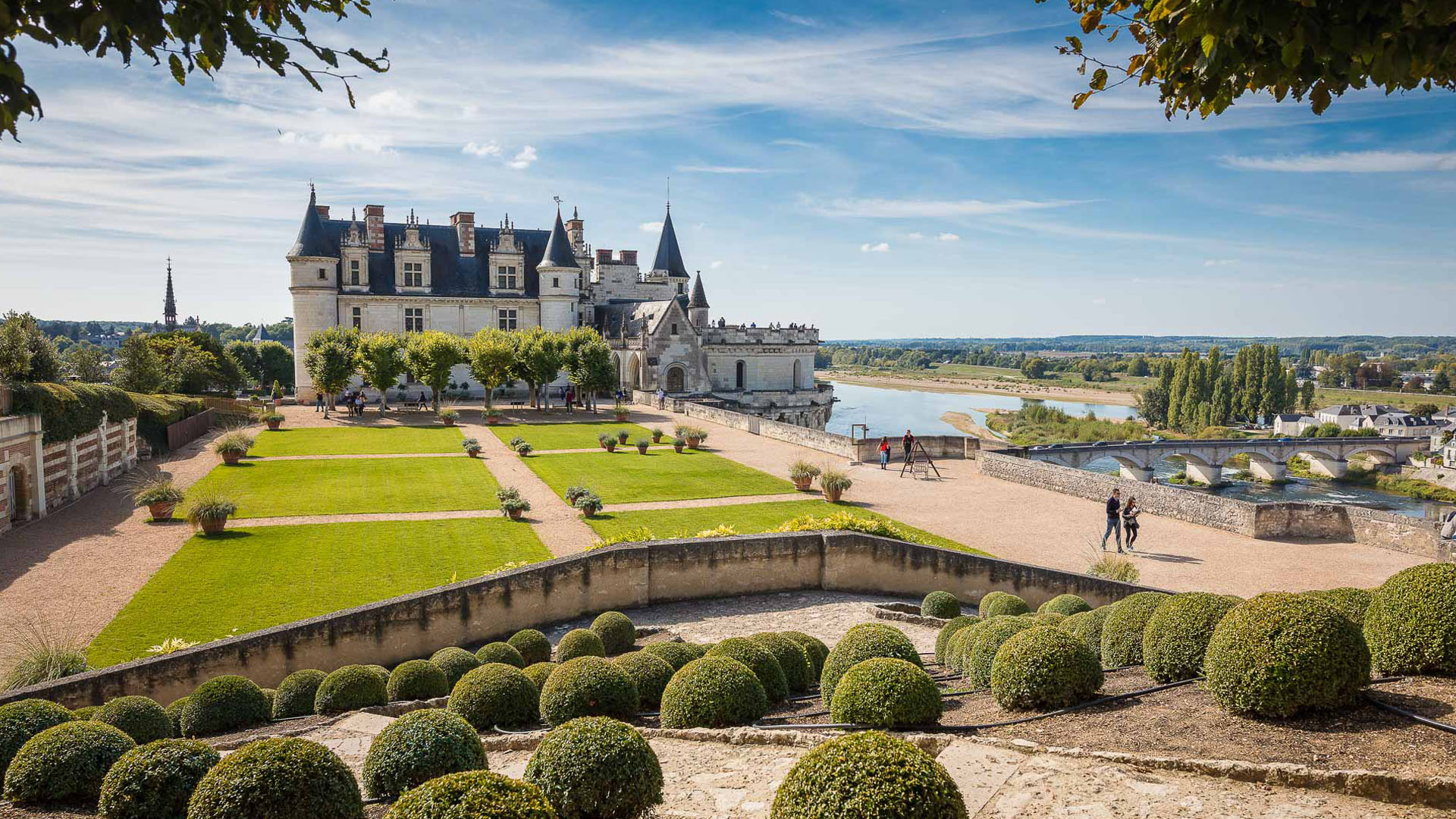 He was not the only Italian artist invited to the royal court. Painters, sculptors, silversmiths and cabinetmakers crossed the Alps, bringing their expertise, as did gardeners and landscapers. The exquisite gardens of the Château Gaillard estate are, as such, the work of Pacello da Mercogliano.

In his studios and workshops at the Clos Lucé, Leonardo da Vinci pursued his research, worked on major projects for the King (a royal palace, the construction of canals for irrigation and navigation and centre staged magical, sumptuous festivities (with an automated lion spitting fleurs-de-lis, an arc de triomphe for the baptism of the Dauphin…), designed to establish royal power even more. This was shortly after 1515 and the famous victory of Marignano.

He lived here the final 3 years of his life, before passing away in 1519. Every year, crowds of visitors, flocking to the royal Château of Amboise, discover his tomb in the enchanting St Hubert Chapel. Take time to wander round the park and the Château du Clos Lucé to marvel at all his masterpieces and creations. 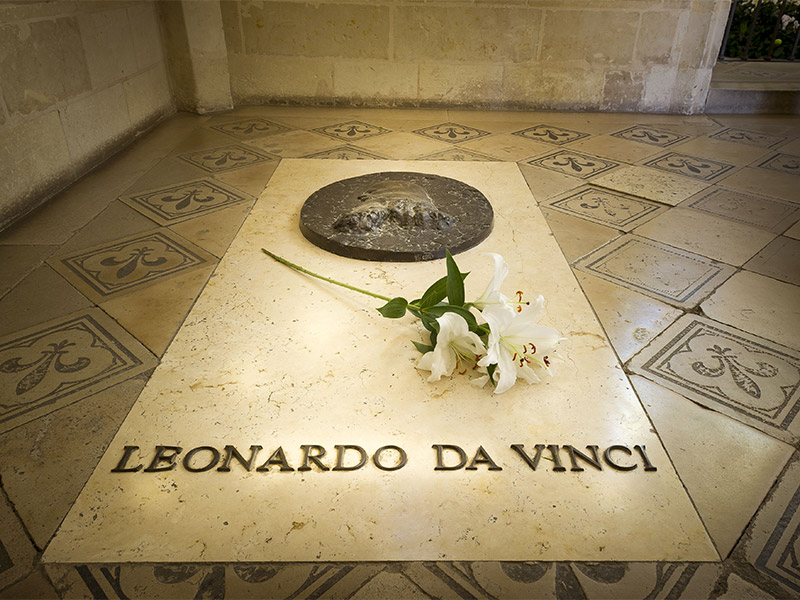 Leonardo da Vinci’s tomb at the royal Château of Amboise