The gourmet break with Hubert Giblet*

He wasn’t expecting it, but last January, Jérôme Roy was awarded a star in the Michelin guide. This was no surprise for anyone who knows and has followed the brilliant career of this native of Loches. But it was for him! All the same, he humbly but fully welcomed the award.

A Chef with both modesty and talent! 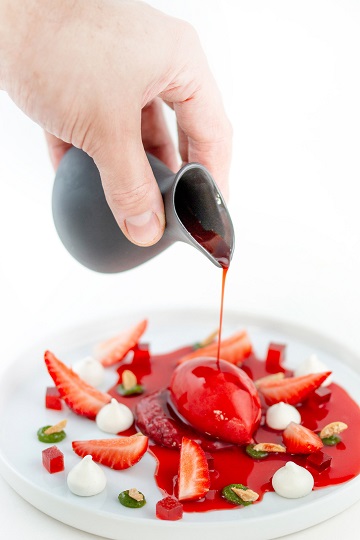 Jérôme Roy was so little expecting to receive a Michelin star this year that he didn’t even watch the ceremony announcing the award. He was quietly having lunch with his family when friends phoned to congratulate him!

It’s true, he had only come back to his native Touraine a few months earlier to open L’Opidom, his own restaurant (November 2019). It’s true, it was not easy to attract attention during the time of covid… But he had the talent and had already won recognition in some great restaurants. In a few words, and skipping over a few periods (time spent in Tokyo, London, Moscow and Geneva, in particular), here is Jérôme Roy’s brilliant career:

But the Chef Jérôme Roy is still surprisingly modest. Fleeing the spotlights, when he is not enjoying sacred time with his family, he focuses on his cooking, trying things out, continually fine-tuning his recipes…

A culinary experience not to be missed! 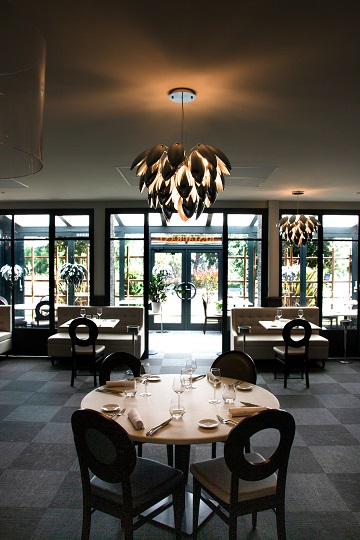 Some people don’t dare set foot in a Michelin-starred restaurant, it’s “another world” for them… If you are one of these people (but also if you are not), you should still go to L’Opidom in Fondettes: you will receive a warm and simple welcome from Valérie, the Chef’s wife. You will then feel right at home in the simple, cosy atmosphere. The waiters and waitresses are not at all prim and stuffy, but friendly and quite relaxed, while being attentive to diners.

In short, people feel good at L’Opidom! And when the appetisers arrive on the different plates, then they feel even better!

I will make your mouth water by revealing the gourmet menu I chose last summer… Well, I didn’t really choose it, since the five-course menu is concocted by the Chef according to the market and his intuition. So it’s always a surprise!

On this particular day, after the appetisers, which were obviously excellent, we were served: 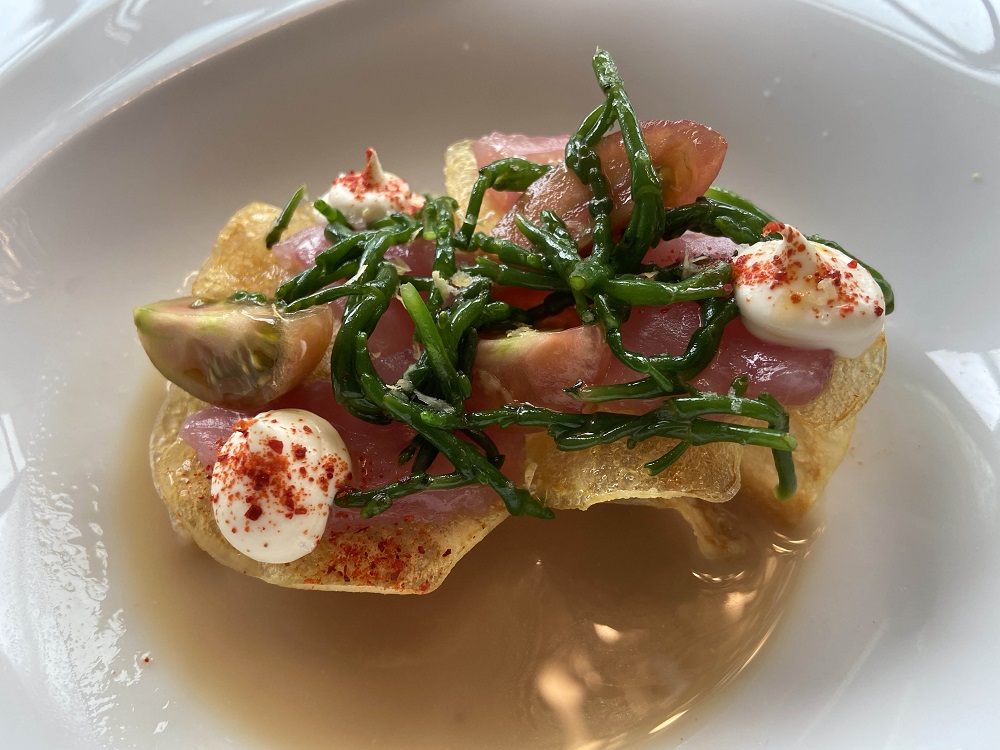 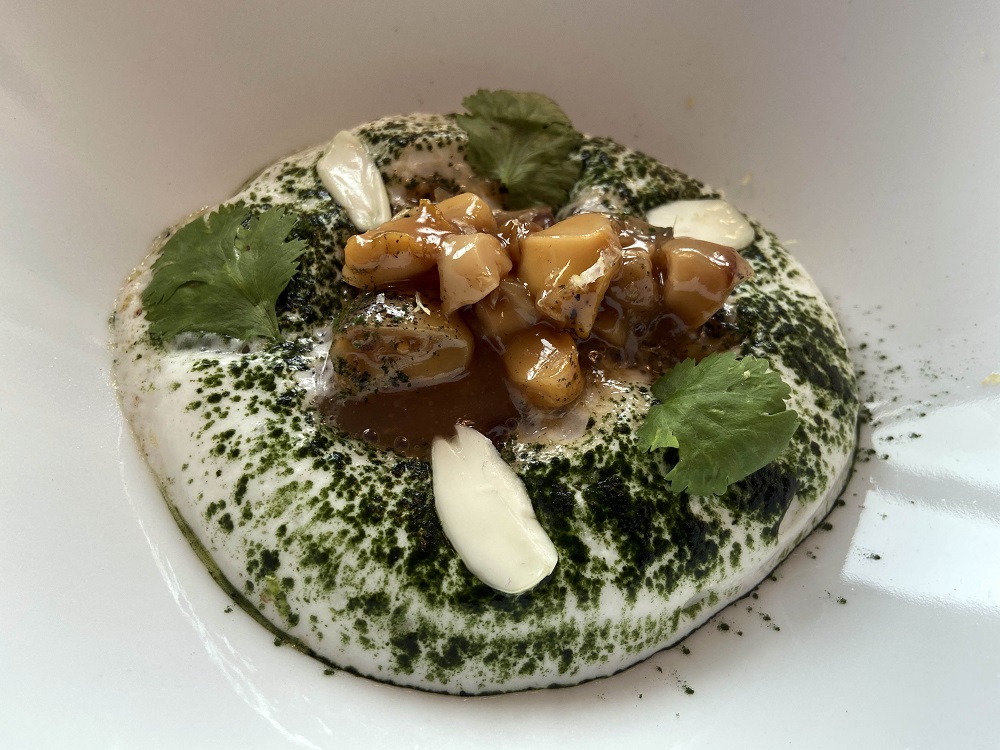 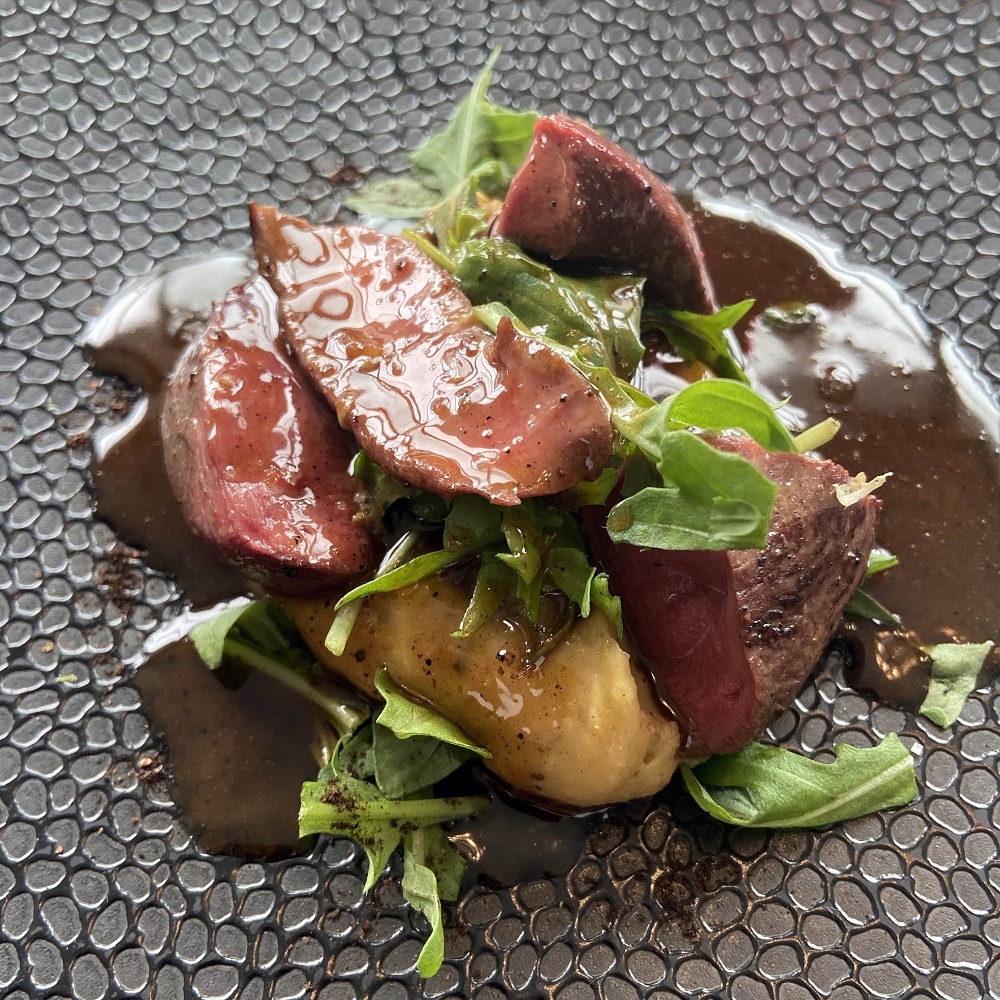 Everything was very well presented and absolutely delicious. Originality, subtle flavours and combined ingredients, exotic touches, precise cooking times, wines to match the dishes: everything came together to make for an unforgettable experience.

Personally, this was the first time I’d tasted whelks except on a seafood platter. But what an experience: a very daring – at first glance – marriage between foie gras and almond milk with plant plankton, but what a success! If this star dish is on the menu when you go to L’Opidom, I really recommend it.

Jérôme Roy always sees his cuisine as light, natural and generous. But also very precise. He has his own herb garden, combining herbs with surprising meticulousness: 27% of his “house” herbes de Provence come from 3 varieties of different plants and 19% from a fourth!

Very much a man of his time, the Chef prefers local, fresh and therefore seasonal ingredients. But though he uses a lot of ingredients from Touraine, thanks to his experience in the south of France or abroad (and carefully chosen suppliers), he adds original and subtle touches to his creative cuisine. So to see if what I say is true, book your table at L’Opidom!